Why I developed Middle School Rules 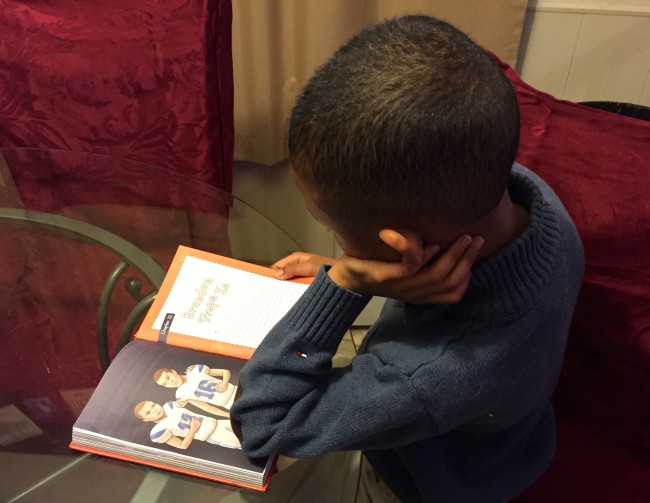 My wife Erica and I try to read to our kids every day.

Sometimes in the morning, often in the evening, always before bedtime.

When they’re babies, of course, parents pick the books, so we can expose them to colors, animals, etc… But as a child grows, he or she takes more ownership in the selection.

In late 2013, I noticed that my then five-year-old son Elijah gravitated toward naughty and whiny characters. I’m not going to call any character out, but they were fictional ones constantly into mischief, or constantly in need of coddling because they got a boo-boo.

So I asked myself: “What can you do about this?”

As a sportswriter published in major newspapers and magazines, and on national websites, I have written hundreds upon hundreds of features and profiles of notable athletes. The narrative typically touches on high school, when the athlete plays on varsity teams, pinpoints a few college highlights then heavily emphasizes the most notable on field and off field achievements or embarrassments.

But for many men, the years usually ignored are the ones that shaped us the most. The insatiable desire to find friends, determine strengths and weaknesses and balance blending in and standing out – all while dealing with ups and downs of our body’s transformation.

Given my unique background – reared in South Korea, adopted by an interracial couple and raised mostly on military bases, educated in public schools through high school then polished in an elite, private college – I have always been fascinated by people, a yearning for learning what makes someone tick.

I also try to embrace a glass half full approach to life, strive to see the best in people and refuse to prejudge based on what’s out there. It frustrates me to no end that we – as consumers of articles, books and movies – tend to typecast someone as either good (white) or bad (black), when all of us are inherently flawed, thus falling in the gray area.

I can think of no greater example of that from my own experience than Minnesota Vikings receiver Randy Moss. One of the most gifted athletes ever, Randy was generally cast as a bad guy because of his role in a high school fight, because he was kicked out of Florida State, because he pretended to moon a fan at Lambeau Field, because he lashed out at a caterer and because he – here’s the kicker – didn’t like to speak to reporters.

Few reporters bothered to delve into the whys of Randy, in part because he almost always refused to cooperate, as did those closest to him. Ultimately, though, Randy didn’t care what a national analyst or writer thought of him. He only cared what his coaches and teammates thought of him.

And they almost universally loved Randy.

Here’s what many fans didn’t know: Almost every offseason, Randy took bus loads of kids from his West Virginia hometown to an amusement park and gave (you guessed it) straight cash… so each could buy some toys and treats.

The catch? They had to show up to school.

The fact is, Randy loved kids, no matter the race, no matter the gender. At training camp, at his peak of fame, hundreds would line up for his autograph. He’d zip by adults with two-toned footballs and authentic jerseys and say, ‘Nah, dawg. Too big…” then he’d settle up to a little boy or girl and ask questions while he signed a jelly-smeared napkin with a Crayola marker.

I once got a tip that Randy had a special relationship with a little girl who had battled leukemia. Kassi Spier was greatly undersized for 7, and her squeaky voice caught Randy’s attention during his rookie season. Brief chats transformed into lunches and revelations, like a shared birthday. He gifted her a battery-operated Barbie Jeep and tickets to a half dozen games.

When she was hospitalized and listed in critical condition, Randy visited her and cried when he had to leave.

“She came around and said, ‘Coach, coach.’ I said, ‘Yes honey,’ ” Tice recalled. “She said, ‘Will you tell Randy I love him,’ and I almost started crying.”

Tice, quarterback Daunte Culpepper and others talked to me, seizing an opportunity to bring some positivity to the polarizing receiver. I had a good, professional relationship with Randy, and I approached him three separate times to answer questions about Kassi. He politely declined each time, despite encouragement from several close to him.

On my last attempt, as he walked toward the locker room, Randy stopped and whispered to me, “It’s personal.”

That’s a longwinded story to say this: People are complicated. Randy Moss, many times cast as evil or immature, was everything a role model should be for a little girl battling a big disease – and he’d rather you not know this much.

There’s a disconnect between most fans and professional players. In my opinion, one massive barrier is that the former simply can’t see past the latter’s big paychecks. Another is that players can’t recognize that not all fans want something from him.

But if they each could put down their armor, they’d recognize far more similarities than differences.

This all brings me back to the question I posed to myself: “What can you do about this?”

I can use my God-given gifts to encourage middle-schoolers to read and, in the process, see the inspirational, character-shaping childhood stories of a famous athlete who envisioned and achieved a dream.

As I wrote this book, I often asked myself another important question: Would you want Elijah to hear or read this? Why I Created Model Student Athlete and How You Can Check It Out for Free!