I’m a storyteller, and I feel so privileged to share so many inspiring stories.

But the fifth athlete in the Middle School Rules series has a story that really resonates with me for several reasons. Vontae Davis grew up in Washington, D.C.; I graduated high school from Mt. Vernon High School, just 18 miles away.

And Vontae and I were both adopted.

I’ll tell you more about Vontae’s remarkable story in a minute. But I want to start in Chicago, where he and I first met. I scheduled a quick, last-minute trip to Chicago, and I asked his marketing agent, Brian Bradtke, if Vontae would be available to meet for lunch. Within minutes, Vontae responded that he would make the time. Two days later, about three hours before our lunch, I texted Vontae to confirm a place to meet. Again, he responded within minutes. I showed up 20 minutes before we were to meet up — and Vontae showed up 10.

We walked to a nearby sushi restaurant in downtown Chicago, and we proceeded to talk for 3 1/2 hours. Vontae was engaging and interesting, inquisitively asking me about my own family and story. He was candid about his own, though never disrespectful or judgmental about those in his challenged childhood.

But when we got up to leave, a young man sitting at the table next to us interrupted us. “Are you an NFL player?” the young man said. “I overheard you guys talking a little bit.”

“Yes I am. My name is Vontae Davis, and I’m a cornerback for the Indianapolis Colts,” Vontae said.

For the next few minutes, Vontae authentically engaged with Danny Walker and father. Vontae learned that Danny was a standout linebacker from Wheaton, Illinois, and he’d committed to playing collegiate football at Kansas State University. Vontae congratulated him on the achievement, reminding him to take seriously his education but also enjoying the opportunity.

A travel lover, Vontae and his wife Megan had long made plans for much of the NFL offseason. But on short notice, Vontae returned to D.C. to personally introduce me to family, friends and coaches from his childhood. On one key day, I had a jam-packed schedule with interviews, yet he insisted on staying with me the entire time — just in case. We started at 9 a.m., and we finished at 10 p.m.

As an elementary schooler, Vontae had to care for his two younger siblings in ways that are unimaginable because his parents battled addictions. The geographic context, however, cannot be ignored: Vontae was born when the crack epidemic consumed D.C., impacting it economically, socially and even politically.

Despite his best efforts, Vontae and his siblings were going to be placed in separate foster homes by Child Protective Services when he was 11 years old. But his grandmother Adaline refused to let them be split up — adopting and raising seven children altogether. As a housekeeper, Adaline and her husband could barely provide for the kids financially but instilled important values in them. Adaline provided unconditional love and timely morsels of wisdom through her firm but faithful approach.

In addition to Adaline, Vontae was encouraged and guided by teachers and coaches, as well as his big brother, Vernon Davis. Vernon yearned to honor his Adaline by maximizing his own immense potential and committed himself to earning a scholarship to college. Vernon paved the way for him and Vontae to historic Dunbar High School and pushed and challenged Vontae to keep improving and striving. 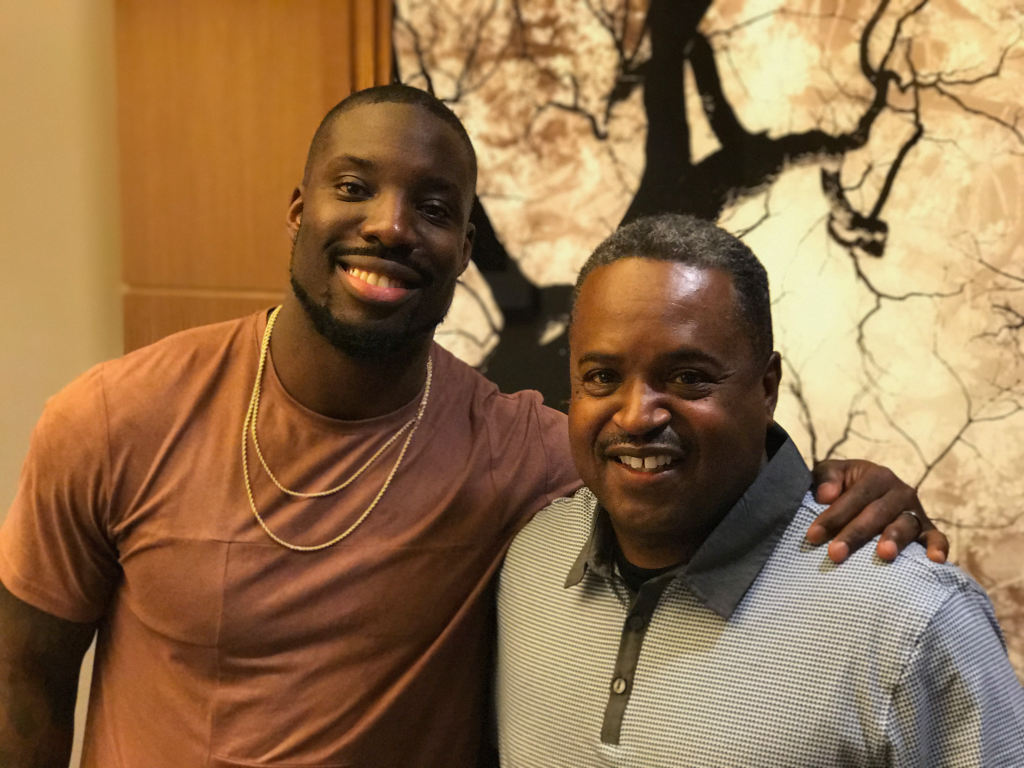 Vontae ultimately earned athletic scholarship offers, and he chose to go to the University of Illinois. After three seasons there, Vontae declared for the NFL Draft, and he was the second cornerback selected, 25th overall in the first round. Now, Vontae is preparing for his ninth NFL season.

Over 1 million boys play high school football every year. About 6.5 % become collegiate players. And, of those, only 1.5 % reach the NFL.

So what odds did Vontae defy?

In The Middle School Rules of Vontae Davis, people will see the challenges he faced, the mistakes he made and, most importantly, the lessons he learned to achieve his lofty dreams.